An Interview with Eileen Law 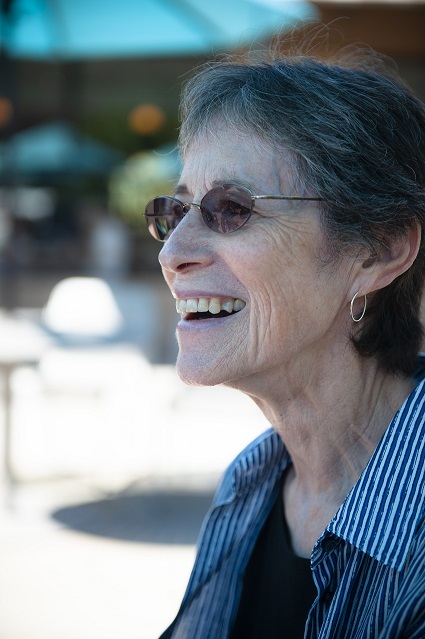 Eileen Law has been called “the spiritual mother of all Dead Heads, their most direct link to the band,” by Grateful Dead publicist and author Dennis McNally. First hired in 1972 to manage the band’s nascent mailing list, she was one of a small group of hardworking staff members and family who worked to foster the Dead Head community. And Eileen’s was the voice you’d usually hear when calling the band’s fabled Hotline to hear recorded news on tours and how to order tickets.

Eileen was also the force behind the preservation of the band’s papers, files, documents, and artwork that came to UC Santa Cruz as the Grateful Dead Archive. We ❤ Eileen Law here at the University Library and were thrilled to talk with her recently.

Q: How did you find your way to the Grateful Dead?

After I graduated from Analy High School in Sebastopol, CA in 1964, I knew I wanted to move to San Francisco. I had a lot of friends there already, and I left for The City that fall. My first job was at AAA, working in public relations. It was a fine day job. But the evenings were particularly fun. At the time, a lot was happening in San Francisco. My friends and I would gather information of the many parties we would go to on the weekends. Many of these were garage parties in the Mission District. In 1965, I noticed a poster for the Jefferson Airplane at the Matrix and we went to see them. That was right around the time that I also saw the Warlocks, before they became the Grateful Dead.
I moved a lot in San Francisco and lived in different places. But moving to the Haight changed everything for me. I would come home from work, change my clothes, and I would go out. All of the artists were living in the area and it felt like a community. The Grateful Dead were living at 710 Ashbury Street. I ended up quitting my job with AAA and moved into a beautiful large Victorian house on Franklin Street with a wonderful assortment of people. We made leather belts in the basement and we sold these at the Mnasidika on Haight Street and the Town Squire on Polk Street. This was right at the time that the Grateful Dead’s first album came out. Back then it was so easy to meet everyone at the dances. Everyone was just very approachable. The ‘backstage area’ was basically on the floor where we were all dancing, so the artists were always there mingling with us.

Q: Did you stay in San Francisco?

No. In the fall of 1967 I moved to Marin County and lived in a number of communal living homes. By the summer of 1968 I was living at Rancho Olompali, where the Grateful Dead spent a summer in 1966. At the time, we were making bread that we would give to the Diggers, who gave it away with free meals to kids in the panhandle, near the Haight. I lived there for a while before moving to a small ranch house on 350 acres between Olema and Point Reyes. I lived there with a small group of people - Peter Coyote being one of them. We had no electricity, but we had firewood and kerosene, etc. In the summer of 1969 I moved to Mickey Hart’s ranch in Novato. At that time, everyone was getting ready to head to Woodstock. I stayed behind to help take care of his ranch. By early 1970, Mickey needed his ‘space’ back and so we all found other places to move to. Luckily at that time, as I was pregnant with Cassidy, Bob Weir and his lady Frankie Hart asked me to live with them in Nicasio. We found a doctor who had just come to Point Reyes and I had a home delivery. I picked the name for my daughter from the movie Butch Cassidy and the Sundance Kid. Since I did not know if I was going to have a boy or a girl, I thought Cassidy would be a good name. Although I lived in a tent in the back of the main house, I delivered Cassidy in Bobby’s bedroom. I will never forget it! Mountain Girl and Steve Parish were her first visitors.

Q: When did you begin working for the Dead?

It was in early 1972 when I heard about the Dead Head’s mailing list. It was an idea of Alan Trist, Robert Hunter, and Jerry. I asked the management of Grateful Dead Productions for a job and ultimately, I ended up working on the band’s first mailing to the Dead Heads. When the band came home from their European tour and the mailing had been completed, I thought my job was finished. But instead I got a phone call and they asked me where I was! So, I went back to work at our office, which at the time was on Lincoln Avenue in San Rafael.
I became the liaison between the Dead Heads and the Grateful Dead for years. The Dead Heads were always kind and their love for the band will not fade away. I ended up working for the band until early 2009, when the semis drove away with the archives to move them to UC Santa Cruz.

Q: How did you choose what to keep for the archive?

I always like collecting things. At first the archive collection was small, but then it started growing especially after the newsletters were being sent out on a regular basis and the publication of the official Book of the Dead Heads, which was later in 1983. Many wonderful letters and art started coming to the band.
In the summer of 1976 when the band came out of retirement and Grateful Dead Records and Round Records closed down, I was the only one working at the Lincoln Avenue office. I discovered many promotional materials that were left behind. In the basement I found boxes of Grateful Dead press clippings starting in 1969-70. I found file boxes of past Grateful Dead employees with photos and letters etc. I also found many return promo mailings sent to the Dead Head’s mailing list which included LP singles, stickers, album cover art etc. from the record companies. It was then that I started to put the press clippings in chronological order. Around that time various artists started giving us copies of their posters, etc. and publication of various books on the Grateful Dead became common.
This was also around the time we started the Grateful Dead Hotlines that gave our tour dates and how to order tickets. Eventually we had two different hotlines. One on the West Coast and one on the East Coast. The lines were accessible 24 hours a day. I always had to keep the machines clean especially after a New Year’s run. People started sending in their ticket requests in decorated envelopes to the Grateful Dead ticket office. The staff at the ticket office in 1983 was small initially, and it was at this time that my daughter Cassidy started working part time. Then after high school graduation in 1988, she came to work for Grateful Dead Productions full time.
While Jerry was still on board, the band bought the old Coca-Cola building in Novato. This was the first building they ever owned. After Jerry’s passing, plans were made for the business office, the rehearsal studio at Front Street, the Grateful Dead Merchandising Company, and the vault to merge and move to this location under one roof. In 2003 the band started discussing closing it all down and selling the building. A small skeleton crew was kept on and we moved to a new office location and rented a warehouse location to store everything including the archives. The band members and management were discussing what to do with the archives which by then was 2006. They understood the value and wanted to make sure it went to the right place that would take good care of it. UC Santa Cruz seemed perfect.

Q: How did it feel to let go of the archive and send it on its way to UC Santa Cruz?

It was a blessing to have those semi-trucks full of materials leave for UC Santa Cruz. Even the huge table that the band purchased in England in 1972 during their European tour that you now have went on the semis. That table used to be in our office at Front Street where the band rehearsed, so it has a cool history. It’s pretty neat that it still has an important part to play.
To be honest, I had been concerned before it all went safely to UC Santa Cruz, because so many people had keys to our storage. I would even change the locks from time to time. I was worried someone would try to get in and take materials. I was just so thankful UC Santa Cruz accepted the collection. It makes me so happy knowing you’ve been working so hard to preserve it all and that anyone is able to go your campus and enjoy the archive.
Thank you for your part in keeping it all alive.

Q: Do you still attend shows by the band members today?

I have actually never been to any of the newer shows. The last show I was at was “The Dead” with Joan Osborne in 2003 at the Shoreline Amphitheatre. I did see the ‘Fare Thee Well’ Chicago performance of 2015 on TV. When I heard Trey Anastasio perform ‘Althea’ I completely lost it. Jerry would have been pleased. It was beautiful!

Q: What made Jerry stand out to you over the years? 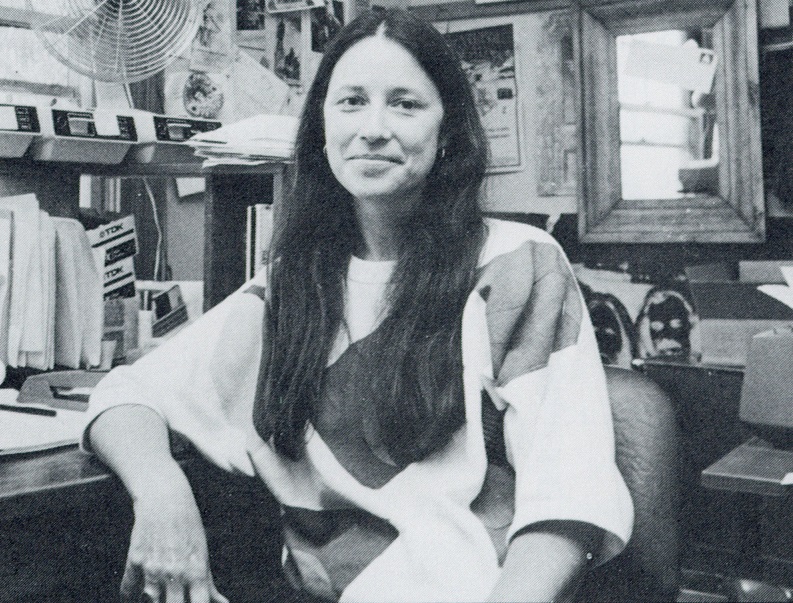 Jerry was just such a people person. Like I said earlier, when I first met them in the Haight they were so easy to approach, all of them. They were always on the street. They always made us all feel so welcome. But Jerry in particular was just amazing. I miss his voice. Not just for the songs, but also for his thoughts. I loved his interviews -- I often wonder what he would be thinking about what is going on in the world right now. All the division, all the anger. What would Jerry say about it? I also liked him because he would stick up for me around the office. He would always help me out. Okay, when he was grumpy, he was really grumpy. But he was just a wonderful person. When I play the new vault releases, I put on my headphones and I can hear his voice when he talks on stage in between songs. I miss him, his smile and laugh, but mostly his friendship.
(Credits: Eileen today, photograph by Joop Rubens/UC Santa Cruz; Eileen in Grateful Dead Headquarters, photograph by Blair Jackson)
1156 High Street