An Interview with Trixie Garcia 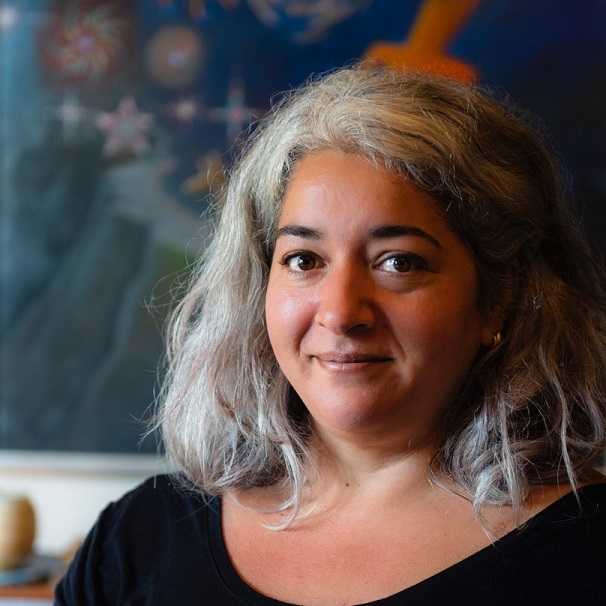 Santa Cruz is a destination for like-minded young people – being on that campus is a real taste of what the California dream is all about. I feel like Grateful Dead music is something that beckoned people to California from all over the country. So now, because of the archive being there, when a student arrives at UCSC, and they see that the campus takes the Grateful Dead seriously and values its contribution to society, that’s amazing.

The Grateful Dead was a culture of its own, with its own moral code and the guiding principles of the counterculture and the hippy scene. This was, of course, a giant constellation, but there were various players, and the Grateful Dead were a piece of that.

It’s important now more than ever. In this political climate, we need a moral compass. It’s important that we are reminded that years ago, there was a movement of young people that wanted to make a difference. I care about social justice and the environment, just as when the youth were fighting against the Vietnam War and Agent Orange. My hope is that the Deadhead culture helps steward the good values of American culture. The West Coast led the planet before and can again now.

Q: Since 2015 there have been a number of new books/films on the Grateful Dead, and at the University, the last three years, in particular, have been very active: we had the birthday celebration in 2015, then the exhibit that focused on situating the archive within the Summer of Love, and now the business papers and the marketing materials. Next, curators will focus on the artwork in the archive. What other part of the archive do you think would be exciting for us to share and why?

There are a lot of great angles to the collection. The Archive could tackle plenty of content. All the artwork from the fans is amazing. There are also tons of personal letters that are really touching, and back then people may have never thought they would be carefully read but bring them out now and they are so interesting.

Another piece, of course, is the business practices of the band. There is real magic in the way that the band maneuvered through the world, and that has not really been expressed much in general. Jerry’s management style for instance—how was he able to lead this group of people? Somehow he kept a group of artists cohesive enough to make it, as a band. People give Jerry credit, and I would like to know if there was any real methodology and how he managed it all.

The lyrics of Robert Hunter would be interesting as well. There are lots of secrets there. His lyrics are quite cryptic. It would be fun to get a better sense of what he was talking about.

The women in the scene, Eileen for instance, and how these women stayed together. I am sure they suffered great hardships. My mom as well—she was doing sound in the 60s, but then she went and raised three kids. Their story would be an interesting one to tell.

Q: It has been 23 years since the official end of the Grateful Dead. What role does the archive play, and can keep playing, in helping to keep Jerry's memory alive?

Even though it has been 23 years since the official end of the band, the Archive is still a place where someone can enjoy the music and dive deep into researching a band that was part of American history. The Archive gives you a place where you can learn about the band’s history and learn about how this grew into such a phenomenon. I mean, chances are that this will never happen again. When will we see hippies traveling in a bus across the country again? Probably never. This was not just a rock and roll band. I mean, it still blows me away, it is trippy really, to have been born into that scene. My dad has been gone so long by now, and it is still overwhelming. He was part of something magical and having the archive to remind us all is great. A rising tide lifts all boats. We need positive stories. Stories about the good of humanity. I have seen so many people who were touched by his music. And it’s great that we can continue that positive vibe. Mind you; My dad did not like to be deified. As a kid, I remember he had a huge presence. He was fun and lighthearted, but when he walked into the room, you paid attention. He did not like to be seen as the god-like figure some people claim him to be. He used to say that he wanted to be remembered as a “confident guitarist.” It reflects his humility. He was so humble, and he hated having his face plastered anywhere. He did not want to be idolized. Understating his contribution is just so perfectly him.

Q: Why do you think the Archive resides at UCSC and not elsewhere?

UCSC is a special school in the UC system. I don’t think there is another school in California that straddles the line between being totally out there yet being totally legitimate. It seems that this is the right place for the Archive. In a way, UCSC is a lot like the Grateful Dead. It is not totally accessible. It’s not totally mainstream. But once you’re there, you don’t ever want to leave.

Q: We have a new online tool to walk through our exhibit. We currently have last year’s exhibit up, Love on Haight: https://guides.library.ucsc.edu/loveonhaight360, and our Outreach Librarian Jessica Pigza recently spoke about the Archive at the Exploratorium’s “Hardly Strictly Science”—another way of spreading the gospel and sharing the collection. We constantly try to find new tools to reach new audiences. Is it important to you and your family for the Archive to reach new audiences, and why?

It is important for the archive to reach new audiences primarily because I think there is a need for humanity to share these kinds of stories for our own well-being. Preserving and telling the story of a very human thing that happened may give rise to a new positive movement in the future. There are things we can learn from this history. There is an academic angle to this. There was more to the band than its music. Feeling part of a community that is in awe of our natural world can lead to so much positivity. Being part of a Grateful Dead show meant you were part of a community that saw beauty in our world. The world around us. A music band is easy to underestimate. Similar to some books—like science fiction, for instance. It is easy to underestimate the power. But science fiction can be inspiring and can be a true gift. It can make young readers embrace exploration, and they can go on to create new technologies. It can inspire kids to become an astronaut or design robots. It also makes you think critically.

Q: UCSC has made a serious commitment to continuing your father’s legacy by sharing the Archive. How would you like to see us do it if money were no object?

Interesting question. First of all, a schedule of free live concerts, of course. But then hire a bunch of people and digitize all the items from the collection, and arrange them in a virtual space so that you get maximum accessibility. And then hire artists, poets, musicians to interpret all of it and to contribute to the discussion.

Q: Why do you think Jerry was so incredibly important to people?

Wow. Who knows really. It’s a mystery to me, but he had his gentle disposition, and he had kind of a knowing energy that led a lot of people toward brighter things. Everybody already loved him by the time I came along though. So it’s hard for me to explain.

I mean, even though he did drugs and liked junk food and even though he made mistakes, he was an amazing person at the end of the day. My dad did not like confrontation and so was never getting into fights or long discussions. I mean, the band, they did so much together. They were living together, doing drugs, but they got into the zone and ended up making an enormous impact on the music and the social scene. But their life had to be hard to maintain. I think playing music for him was meditation. It was his way of living in the moment. And I think people were drawn to his gentle demeanor.

Q: What was most inspiring to you about your father?

He really liked people and knew how to enjoy himself, and that is a pretty wonderful thing to remember about him. He also had a certain level of “not giving a shit.” He was a natural leader, a visionary. He never wanted to be the shaman, the wizard. But he was confident and had a strong presence. He was an incredible person.

Q: If you wanted to say something to the people who support the Archive, what would it be?

Thank you for trying to ensure this thing that means so much to so many is protected into the future.