In this tutorial, we’ll explore how to connect our different data points with lines in order to illustrate how journeys moved from Africa to ports in the Americas. We’ll also go over how to show labels for these ports. But first, let’s secure a new dataset from SlaveVoyages.org for this exercise.

STEP 1: Downloading a Dataset for Luanda from SlaveVoyages.org

For the purposes of this exercise, let’s narrow down the data we will visualize. Navigate to the Trans-Atlantic Slave Trade Database at SlaveVoyages.org and filter the results by Itinerary > Place of purchase > Principle place of slave purchase. Type “Luanda'' into the search field and check the box when it comes up in the results. You should see your results filtered down to a total of 3,624. (Note that this is the same filtering process we described in the Mapping Data from SlaveVoyages.org tutorial.)

Download that dataset by clicking Download > Excel > Filtered results with visible columns. Then modify the downloaded data (with columns for date, latitude, and longitude) so that it is ready to map as two separate CSV files, one called “sv-Luanda-embark” and “sv-Luanda-disembark.” Reference the tutorial Mapping Data from SlaveVoyages.org for a reminder of how this data needs to be modified and structured. Remember, you'll need to copy your data into two different sheet within your document, add the ports spreadsheet, and use VLOOKUP to add latitude and longitude data to each of the two sheets. Pay close attention to the instructions about VLOOKUP—you'll need to make sure change the column numbers from one sheet to the other as specified in the tutorial.

One thing is a little different here, though. For the embark sheet, you’ll notice that every embarking location is the same (Luanda). To make this simpler for QGIS, select all but the first row of data in that sheet and delete those rows. This will leave you with a single point for this layer, but that is all you need. Your sheet should look something like this:

Once you have your two CSV files ("sv-Luanda-embark” and “sv-Luanda-disembark”) ready to go, open QGIS and create a new project named “sv-Luanda.” Load the basemap file we've been using and then the two new Luanda CSV files.

Before we generate lines connecting our ports, let’s set labels to display on these ports. First, double click the "sv-Luanda-embark" layer and go to the Labels tab. Then, 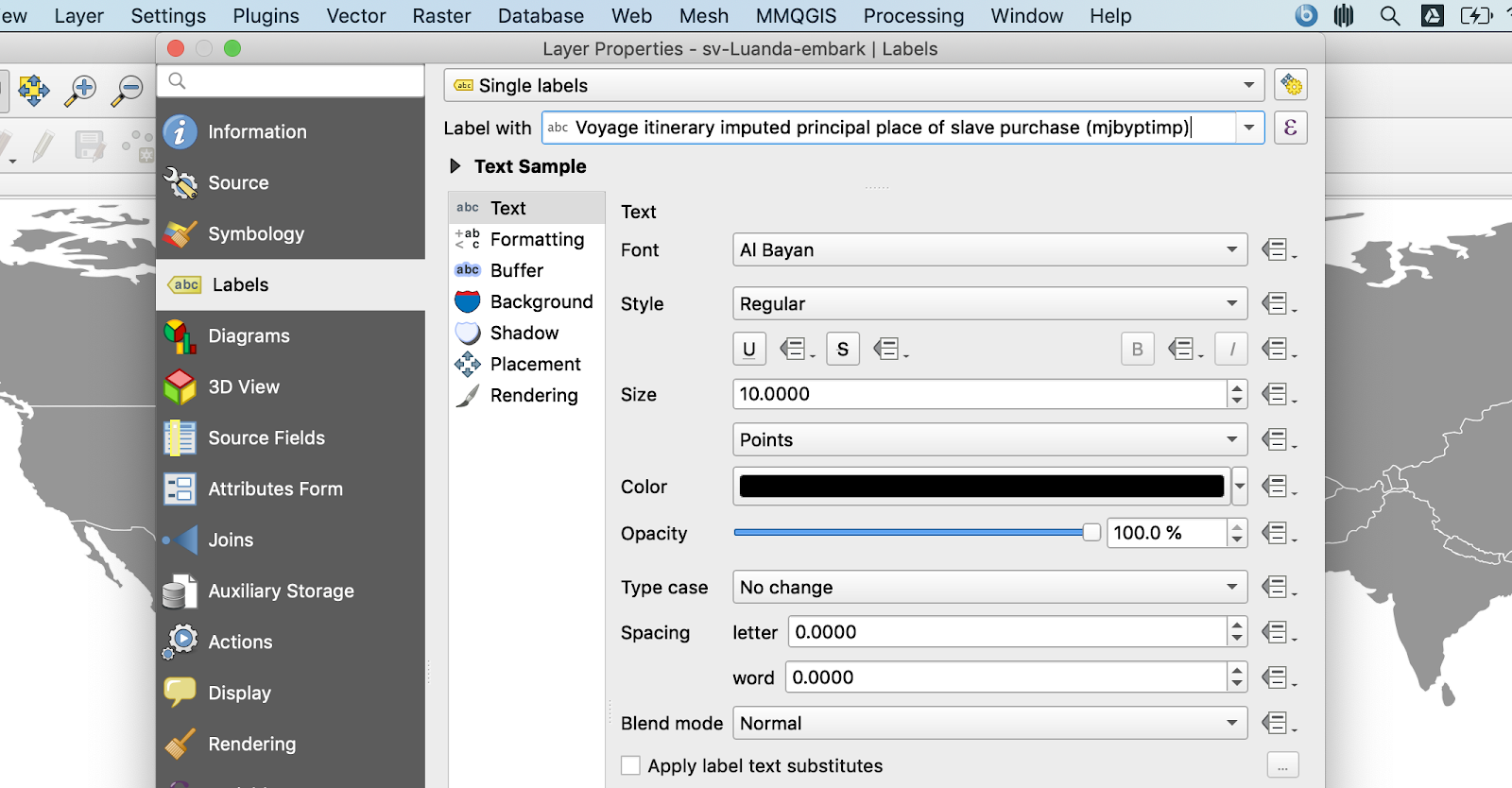 You probably won’t see the labels for all the disembark ports show up immediately (you may not see any labels at all). That’s because there are enough ports that QGIS has difficulty rendering all the labels when you are fully zoomed out. This creates the additional problem that even our Luanda label can’t be rendered. But we can fix this. 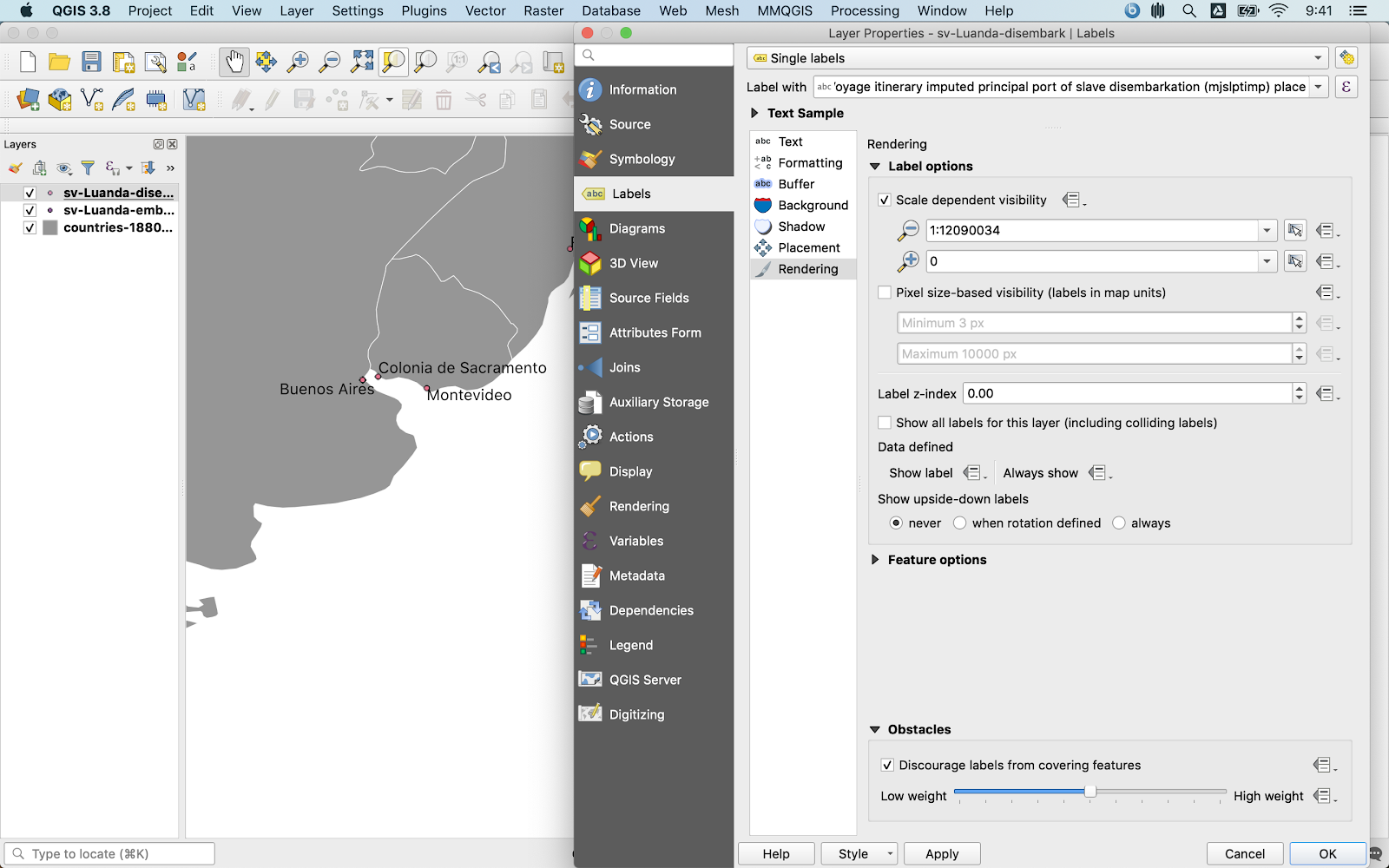 Now zoom out. When viewing the full map you should see the Luanda label. When you go to explore particular clusters of disembarking ports, when you zoom in enough those labels should appear. 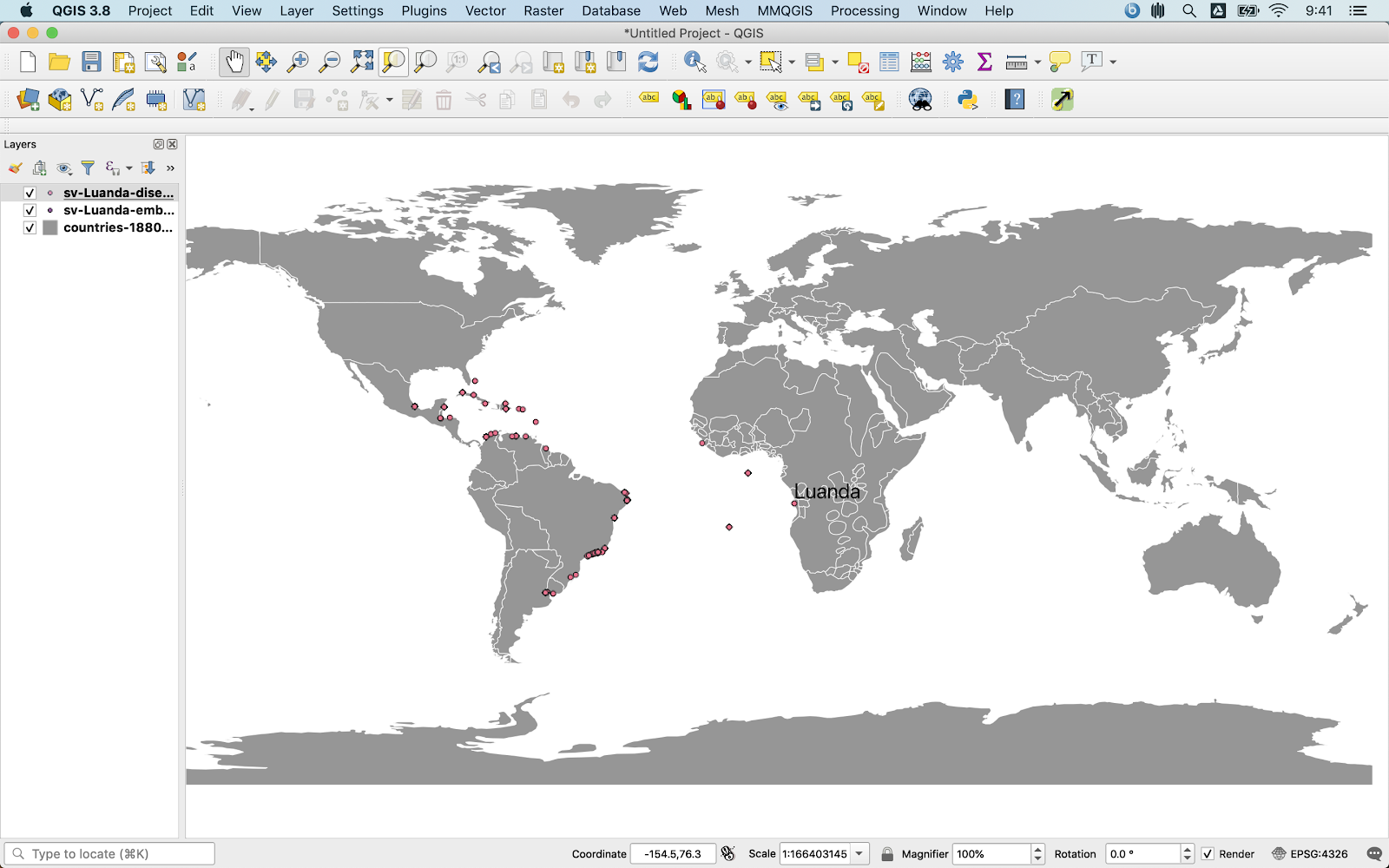 Now it’s time to connect our Luanda embarking hub to the various disembarking ports we have in the Americas. Given the large number of lines we have to draw, we’ll utilize a tool that is part of a QGIS plugin called MMQGIS. To install this plugin, in the top menu navigate to Plugins > Manage and Install Plugins… Type in “MMQGIS” and hit install. Now you’re ready to proceed. 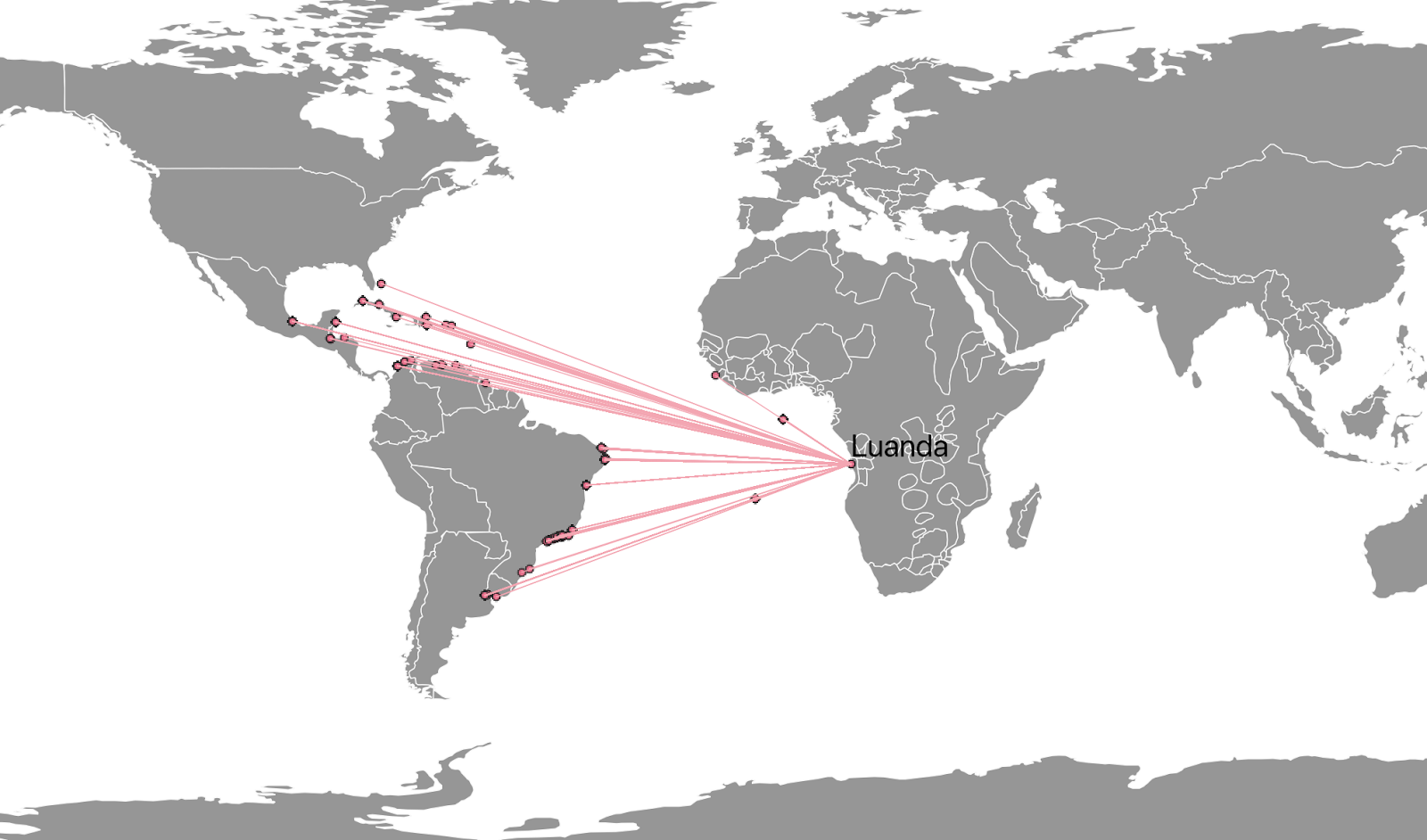 The lines show what regions of the Americas enslaved individuals who departed from Luanda were taken. But what is not immediately apparent is that most of these individual lines are in fact multiple lines laid on top of each other—because there were multiple journeys over this route. It would be nice to find a way to visualize which routes were heavier without clouding up the map too much. One simple way to do this is to modify the color and opacity of the lines. Making the color dark and then taking the opacity down to a very low percentage will make lines that have more overlap display darker than lines with less overlap. Here’s how to do that:

The results won’t be dramatic, but they should be enough for you to quickly note the routes that were busier compared to the ones that were less busy. Zoom in to get a closer look where many routes bunch together.

Another thing we can do quickly that will help reveal where the routes were heaviest has to do with the display of the points.

Now for each disembarking port, you will see a number display. For our purpose, this is the number of times the data shows that a ship that embarked from Luanda arrived in this port. The higher the number, the darker the connecting line should be.

Finally, one last change we can make is to thickness of the lines themselves.

Now you should see lines appear thicker that represent a greater number of captives that were transported.