news on exhibits, publications, and events featuring our collections 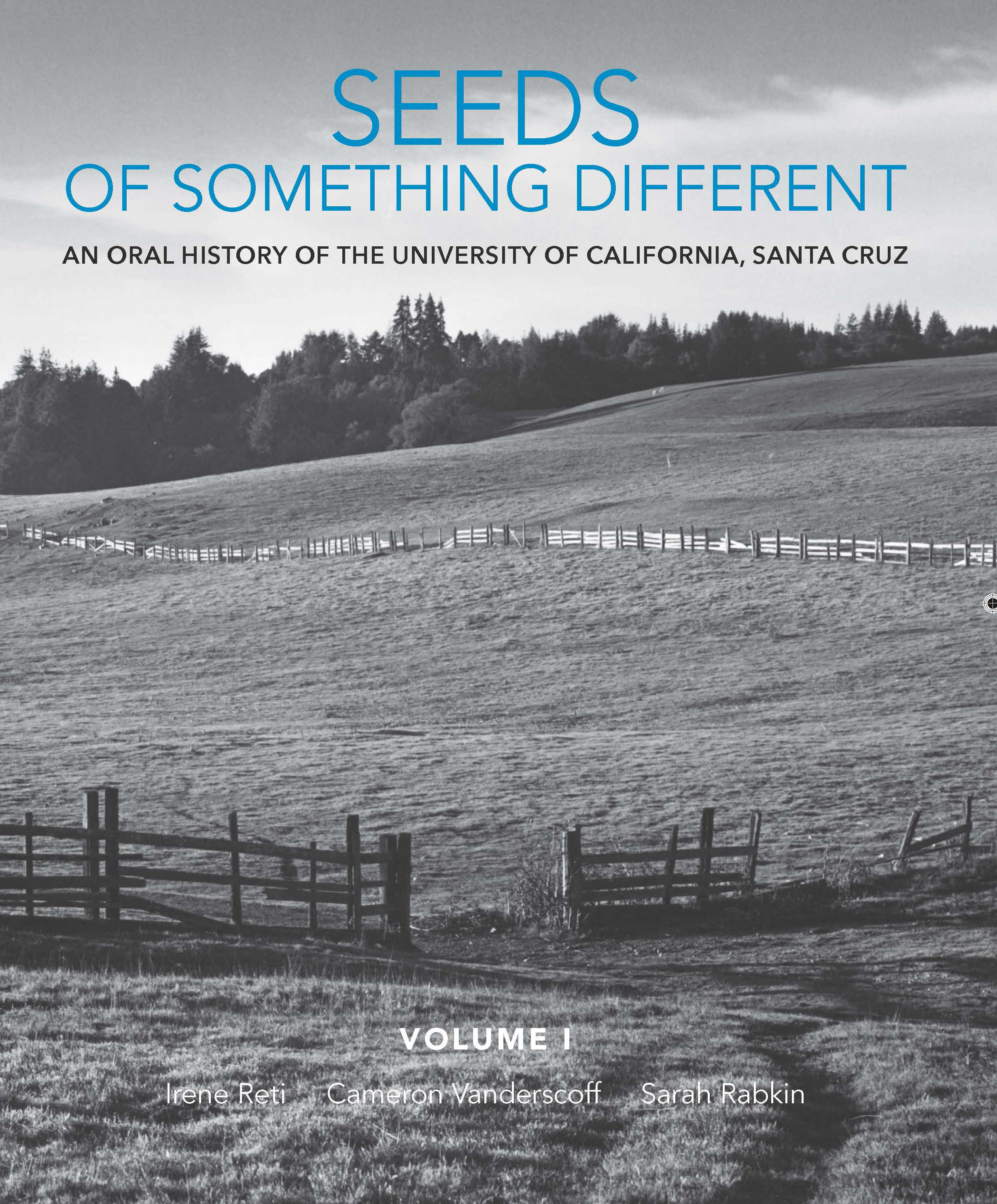 From UC Santa Cruz's Regional History Project, Seeds of Something Different: An Oral History of the University of California, Santa Cruz. This masterful two-volume history weaves together first-person accounts of the campus's evolution, from the origins of an audacious dream through the sea changes of five decades. With more than 200 voices and a trove of archival images from Special Collections & Archives!

Mark your calendars for a live and participatory event series featuring readings from SEEDS!

Each session will feature co-editors of the book and special guest respondents, including some of UCSC's most beloved faculty and staff. The series is created especially for UCSC alumni, but all are welcome! We've designed the six-session virtual Zoom series so you can tune in for one reading, or join us for the decade-by-decade serialized journey through UCSC history.

Co-sponsored by the UCSC Alumni Association and the UCSC Library

Reading #1: The Pioneering Era and the Rising Counterculture (1960s)

Frank Zwart arrived at UCSC as a student at Cowell College in 1967. He graduated in mathematics and then studied architecture at Princeton University. Zwart returned to UCSC in 1985 as a staff architect and project manager, became Campus Architect in 1988, and later directed UCSC’s Office of Physical Planning & Construction until his retirement in April 2010. See Zwart’s oral history.

Ed Landesman was inspired by UCSC’s emphasis on undergraduate teaching within a major research university to join the mathematics faculty in 1966. He taught at UCSC from 1966 until 1994. In the 1970s Landesman was provost and senior preceptor for academic affairs at Crown College and in the early 1990s he became the campus’s first associate academic vice chancellor for undergraduate education. He has also been a pioneering leader in mathematics education on a statewide and national level. See Landesman’s oral history.

J. Herman Blake arrived at UCSC in 1966 as a member of Cowell College and a professor of sociology. He was the first African American faculty member at UCSC. Blake remained at the campus for eighteen years. Blake is beloved at the campus, both as a charismatic, rigorous, and brilliant teacher/mentor and as the visionary leader who founded UCSC’s seventh college, Oakes, and served as its first provost. Issues of educational access and retention remain at the core of his life’s work. See Blake’s oral history.

Olga Nájera-Ramírez grew up in Davenport, near Santa Cruz. She attended UCSC as an undergraduate student, then returned as a tenured professor. She arrived as a Merrill College student in 1973, danced with the troupe Grupo Folklorico Los Mejicas, and earned a dual degree in history and Latin American studies in 1977. She was a professor in the anthropology department from 1989 until her retirement in 2015. Nájera-Ramírez is a founder of UCSC’s Latin American and Latino studies department and has directed the Chicano/Latino Research Center (CLRC), now called Research Center for the Americas. Since 1996, she has provided faculty advising to Los Mejicas. See Nájera-Ramírez's oral history.

Reading #3: "Rocks Ahead": Reorganization of the College System (1980s)

G. William (Bill) Domhoff arrived at UCSC in 1965 as a member of the founding faculty at Cowell College. He was a professor in the sociology and the psychology departments. A pioneer in the scientific study of dreams, Domhoff is best known as the author of several best-selling sociology books, including Who Rules America?Domhoff served as chair of the Academic Senate in the early 1990s, and as dean of social sciences in the mid-1990s. He retired in 1994 but has remained an active scholar-researcher. See Domhoff’s oral history.

George Blumenthal was UCSC’s 10th chancellor. He joined the campus in 1972 (Oakes College) as a faculty member in astronomy and astrophysics. He served as chair of the UC Academic Senate (2004-05), was the faculty representative to the UC Regents (2003-05), and chaired the UC Santa Cruz division of the Academic Senate (2001-03). Blumenthal was named chancellor on September 19, 2007, after serving as acting chancellor for fourteen months; he retired in June 2019. Blumenthal is now the director of the Center for Studies in Higher Education at UC Berkeley. Blumenthal's oral history is forthcoming in 2021 from the Regional History Project.

Bettina Aptheker came to UCSC in 1980 as a lecturer in the women’s studies department.She earned her PhD from UCSC in History of Consciousness in 1983. Aptheker taught one of the country’s largest introductory feminist studies courses, Introduction to Feminisms, which inspired generations of UCSC students. Renowned as both an activist and a scholar, she is the author of several books, including The Morning Breaks: The Trial of Angela Davis (2nd edition, 1999) and Intimate Politics: How I Grew Up Red, Fought for Free Speech and Became a Feminist Rebel(2006). Aptheker retired in 2018.

Murray Baumgarten arrived at Stevenson College in 1966 as a professor of literature. He served as the first chair of the Modern Society and Social Thought major, offered through Stevenson College. In 1967, Professor Baumgarten co-founded the world-renowned Dickens Project, and ten years ago, with the help of the Helen Diller Family Foundation, he established the Jewish Studies program, for which he is now the projects coordinator. Murray is also well known as the co-teacher (with Peter Kenez) of the course Holocaust: the Destruction of European Jewry.

Gary Griggs arrived in UCSC’s earth sciences department in 1968 as the campus’s first faculty member with expertise in oceanography, teaching a wildly popular undergraduate course on the subject. He served as associate dean of natural sciences from 1991 to 1994. From 1991 to 2017, Griggs directed the Institute of Marine Sciences and Long Marine Laboratory. Griggs is an internationally known consultant, writer, and public speaker on coastal erosion, sea-level rise, adaptation to climate change, and other issues related to coastal geology. See Griggs’s oral history.

James (Jim) Clifford came to UCSC in 1978 as a professor in the History of Consciousness department. His scholarship and teaching combine perspectives from history, literary analysis, anthropology and cultural studies, as well as drawing on contemporary poetics and museum studies. Clifford was the founding director of the UCSC Center for Cultural Studies, for two decades the principal campus research organization in the humanities at UCSC. He remained at UCSC for thirty-three years until his retirement in 2011. See Clifford’s oral history.

Donna Haraway came to UC Santa Cruz in 1980 as a professor in the History of Consciousness department. Her position in feminist theory within History of Consciousness was probably the first of its kind in the country. With attention to the intersection of biology with culture and politics, Haraway explores the web of science fact, science fiction, speculative feminism, science and technology studies, and the multispecies world. She retired from UCSC in 2011, but remains an active participant in the Science and Justice Research Center and the Center for Creative Ecologies. See Haraway’s oral history.

SEEDS prevailed in spite of a pandemic, and a second printing is in the works! Read more in the University Library's Spring 2020 Newsletter.

"The editors have shown great skill in taking pieces of the oral histories and putting them together to make a compelling and highly readable narrative." - Barry Bowman, UCSC Emeriti Association Newsletter, April 2020 (read the entire review here)

Irene Reti made a special presentation about SEEDS at the May 9th virtual gathering of Researchers Anonymous, an ongoing program for people interested in researching, writing, reading, and sharing the history of Santa Cruz County, California. 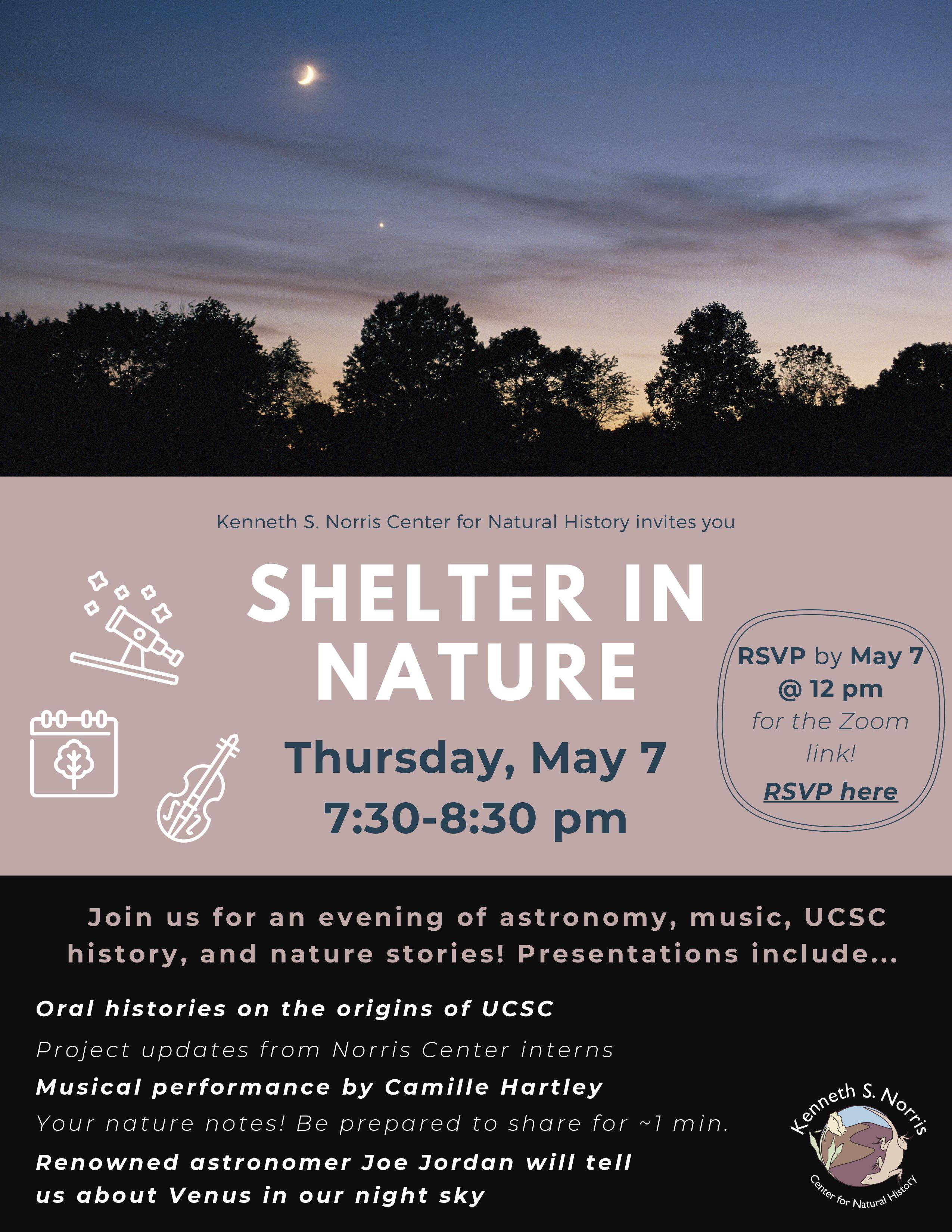 Talking SEEDS on KSQD Community Radio: Irene Reti was interviewed by Wallace Baine on May 7th. Listen to her interview here.

Listen to the recording from the April 10th Virtual Reading and Book Launch Party, organized by the wonderful Jory Post and sponsored by Bookshop Santa Cruz, Phren-Z magazine, and the Hive Poetry Collective.

Co-editor Cameron Vanderscoff talks about SEEDS with Richard Eeds on Santa Fe's Talk KTRC 1260! Listen to his series of interviews about SEEDS: March 26th (22 minutes) and April 7th (34 minutes); and his return interview on June 3 (23 minutes) which covers SEEDS as well as COVID-19 and protests happening now in New York City.

“Archival Research as Penance”: The Papers and Library of Hayden V. White 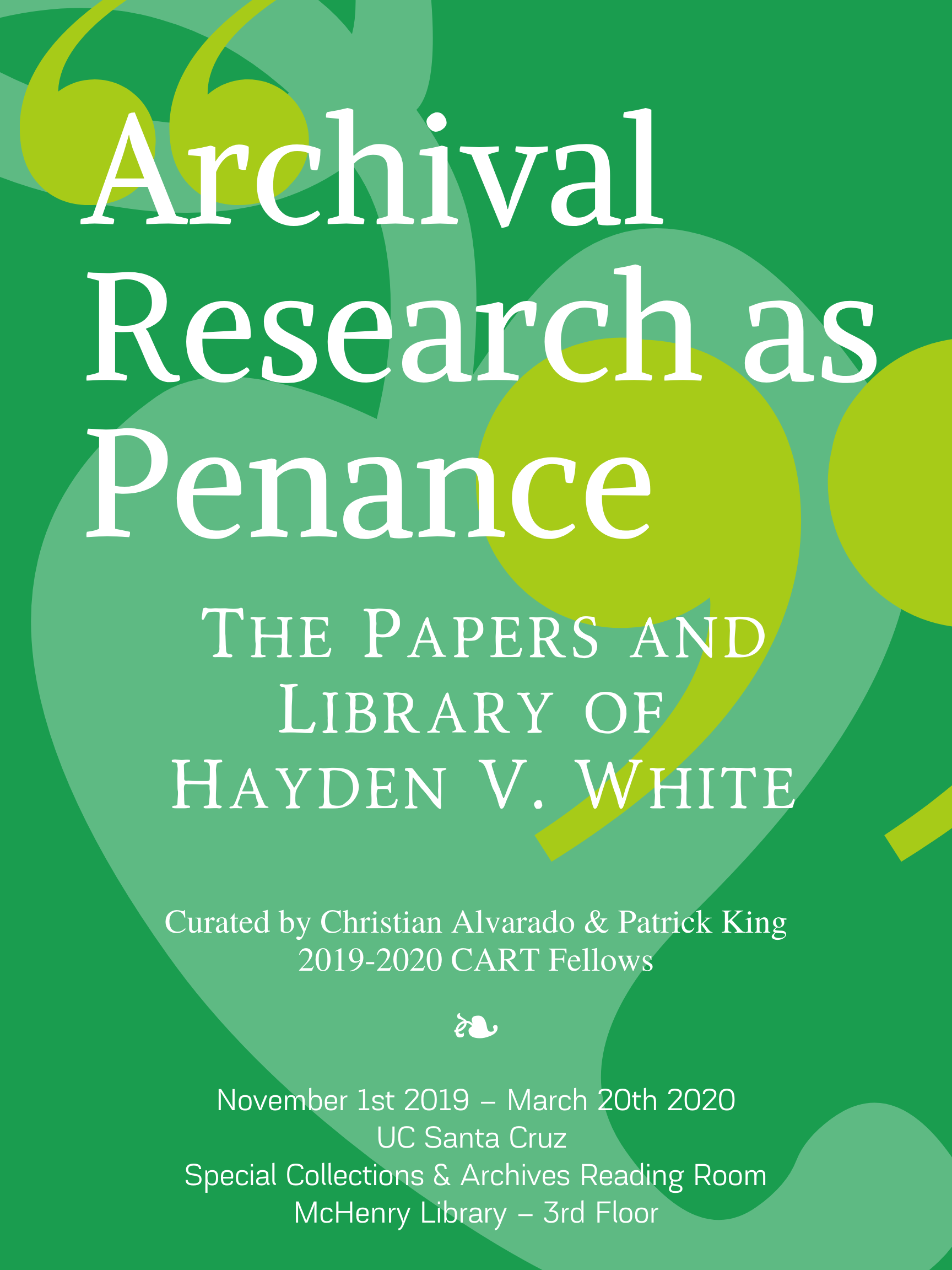 Drawing on Hayden White’s newly available archive, this exhibit traces various sites of his intellectual work, teaching, and activism. Materials document his foundational role in building UC Santa Cruz’s pathbreaking History of Consciousness program, his powerful challenges to prevailing ideas of historical interpretation, and his part in a landmark legal ruling in favor of the civil rights of students in the United States which he regarded as one of his proudest accomplishments. In mapping the times and spaces where White elaborated his ideas, Archival Research as Penance invites others to think with him.
Curated by Christian Alvarado and Patrick King, 2019-2020 Fellows in the Elisabeth Remak-Honnef Center for Archival Research and Training.
Special Collections & Archives is grateful to Margaret Brose, whose generous donation of Hayden White’s archive to the University Library has made this exhibit possible.
Thanks also go to The Humanities Institute for its support of fellowships in the Elisabeth Remak-Honnef Center for Archival Research and Training.

When We Paint Our Masterpiece: The Art of the Grateful Dead Community 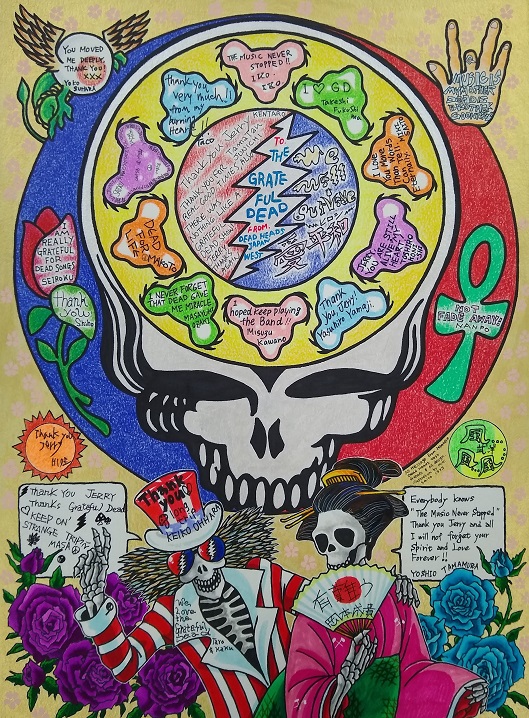 LOCATION: Dead Central, on the main level of McHenry Library

Any reference to the Grateful Dead, perhaps the world’s most iconic improvisational band, can easily conjure images in one’s mind of psychedelic tie-dyed clothes, dancing bears, and rose-garlanded skeletons. But just as they defied expectations with their music, the band also inspired in their listeners a diverse visual landscape in response to their songs.

The creative works presented in When We Paint Our Masterpiece, drawn from the Grateful Dead Archive, reveal a richly envisioned and varied world of design practices, international traditions, visual icons, and art forms. Sent to the band from around the world, these works document the blossoming of a transnational community of Dead Heads even in countries where the band never toured, like Japan.
This artwork also reveals the deep affection that the band and its staff—who curated the collection piece by piece—had for Dead Heads’ unique and broadly conceived notions of what Grateful Dead-related art could and should be. Pencil sketches, abstract works, portraits, and screenprints share space with sculptures in paper and metal. Repurposed found objects as well as comic art and drawings inspired by the English Arts & Crafts movement a century ago all have a place here. The Grateful Dead’s universe made space for all of these patterns and images.
These works, considered collectively, offer a powerful example of the possibilities of fan culture. Collaboratively created, expanded, and improvised for over half a century, the art of the Grateful Dead fan community remains vibrant today. Dead Head artists like Miki Saito and others continue to make new art, and as stewards of the Grateful Dead Archive, we “hang it up and see what tomorrow brings,” as Robert Hunter counseled so long ago.

(card sent to the Grateful Dead from Dead Heads Japan, with art by Miki Saito)